What are Kampo products?

When you hear the words “Kampo product,” you may have an image that one Kampo product is made from one raw material, but in fact, this is not necessarily true. For example, when you have a cold, you may take “Kakkontou,” but this medicine is not made from a raw material called “Kakkon.” It is made from a combination of seven crude medicines: pueraria root, ephedra herb, cinnamomum twig, peony root, ginger, jujube, and glycyrrhiza.
Many Kampo products are made from a combination of multiple crude medicines, and these combinations are called Kampo prescriptions. There are more than 200 varieties of Kampo prescriptions approved in Japan , and people can choose a prescription depending on their symptoms. 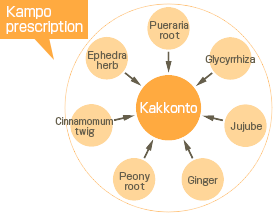 Kampo products which are in fact very familiar

The difference between “Kampo medicine” and “Western medicine”

When people hear the word, “Kampo,” many of them may have assumptions such as “old medicines” and “it takes a long time to see the effects,” but these are not necessarily true.
Currently, a combination of Western medicine and Kampo medicine has been able to improve diseases which had been thought to be difficult to heal, and there are fast-acting Kampo products exhibiting their effects as soon as five minutes after taking them. In addition, Kampo has a unique concept called “Sho,” which leads to prescriptions depending on the condition of each person’s body. Kampo treats “people” rather than “diseases,” and there are diseases that respond only to Kampo. That’s why interest in “Kampo” is on the rise.

Diseases in elderly people tend to trigger “multi-organ diseases” which decrease the functions of multiple organs. Therefore, for the treatment for elderly people, it is important to not just stick to one set of symptoms, but also see the condition of the entire body. Those who have multiple diseases need a medicine for each disease, and have to be careful with the onset of adverse reactions. Kampo products are useful for such cases.
They contain various crude medicine ingredients, and if they are suitable for the patient’s condition, the number of the medicines he/she must take can be greatly reduced. For example, Tokishakuyakusan is often prescribed for irregular menstruation, menopausal disorder, and bad conditions before and after delivery and contains a total of six crude medicines: Japanese angelica and cnidium rhizome for smoother blood flow, peony root for pain relief, and poria sclerotium, atractylodes rhizome, and alisma rhizome for water volume adjustment. In this way, Kampo products contain natural products with various effects and can comprehensively work on the entire body, resulting in improving the “natural healing power” that the body originally has and reducing the burden on the patient by decreasing the number of medicines the patient has to take.

The climacteric period for women is about 10 years, about five years each before and after menopause, and changes in the body’s condition and other bad conditions observed during this period are called “menopause symptoms,” which occur in women around age 50.
The main cause of these symptoms is said to be a decrease in female hormone, but the symptoms vary depending on the individual and include bad conditions such as chills and hot flushes, excessive sweating, palpitation, obesity, insomnia, and frustration. For such symptoms, Western medical treatments supplement the deficient amount of female hormone, and tranquilizers and sleeping pills are usually prescribed. In Kampo medicine treatments, medicines are prescribed after checking the patient’s condition comprehensively instead of prescribing one medicine for one symptom. Based on a detailed and accurate examination by checking the patient’s complexion, skin condition, the way the patient speaks, tone of voice, pulse strength, and abdominal distention, medicines suitable for the patient are prescribed. For example, if the patient has relatively sufficient physical strength with severe hot flushes, Keishibukuryogan is usually prescribed, if constipation and frustration before menstruation are observed, Tokakujyokito, and if sensitivity to cold, dizziness, and heavy-headedness are observed, Tokishakuyakusan. However, the details and severity of the menopause symptoms vary, and the causes that worsen the symptoms depends on the person. Therefore, people are now interested in “Kampo” which is prescribed considering these factors as well.

Disease for which Western treatments have not been clearly established

Cramp in the calf

Cramp in the calf is a general term for a muscle spasm with strong pain that occurs in the calf, which is one of the ailments Kampo products are effective against. The causes of the muscle spasm include excessive muscle fatigue, a deficit of water and minerals, and neurological abnormalities. It acutely develops especially after hard exercise or during sleep, and even after it settles down, you may still have a sense of discomfort or a habit of spasm. The muscle spasm is likely to develop in the calf, but similar symptoms are sometimes observed in the fingers, shoulders, and neck. A Kampo product often prescribed for such symptoms is Shakuyakukanzoto. It is a simple prescription comprising of two crude medicines, peony root and glycyrrhiza, but is fast-acting and resolves the spasm within as early as five minutes. It is said that there is no Western medicine as effective as this medicine for cramps.
Many people misrecognize Kampo products by assuming they are not fast-acting and it that takes a long time to see their effects, but as shown in this example, many Kampo products are fast-acting and sometimes more effective compared with Western treatments (treatments using new synthetic medicines).

Atopic dermatitis is an allergic disease. Eczema with itchiness repeatedly improves and worsens, and it is quite difficult to recover completely. Atopic dermatitis is mainly categorized into moist and dry types, and its causes vary from psychological stress and bad eating habits to house dust. As a Western treatment, antihistamines to suppress allergies and the application of steroids to relieve inflammation are the main treatment methods. Steroids may be useful to relieve local inflammation, but adverse reactions due to the long-term use of the medicine or rebound reactions due to abrupt discontinuation may occur. Kampo products are useful for this disease. If the lesion is moist with redness, Ohrengedokuto and Shofusan can be prescribed for a moist lesion with redness. If severe suppuration is observed, Jumihaidokuto can be prescribed. If the skin is dry, Unseiin or Keigairengyoto can be prescribed. Kampo products can be prescribed depending on the patient’s overall condition, and the patient can alleviate tough symptoms and stress and receive a treatment that makes the disease less likely to recur.

Diabetes mellitus has two types: type 1 which is caused by the collapse of beta cells in the pancreas and type 2 which is caused by bad lifestyle habits or obesity. What is frightening about this disease is if it advances, many complications such as numbness, swelling, pain, frequent urination, difficulty urinating, and dry mouth develop, possibly causing other serious diseases. Therefore, it is sometimes difficult to treat with only Western therapies. Kampo is useful for such a case. Hachimijiogan or Goshajinkigan for numbness and Byakkokaninjinto or Bakumondoto for dry mouth can be prescribed depending on the person’s overall condition. It may be difficult to control blood pressure with only Kampo, but they are excellent medicines to favorably maintain the patient’s overall condition such as relief of complications.